Boston Ivy is a deciduous vine with bluish fruits and bright red fall foliage. A member of the grape family, Boston Ivy is commonly used as a decorative addition for buildings. This means that it is most often used to grow on sections of buildings, walls, and fences for its aesthetic beauty. The glossy dark green leaves turn bright red in the fall. Showy leaves are held late into fall or early winter. This vine does well in poor soil and can grow in shade to full sun. While technically considered an invasive plant species (originally native to Japan), Boston Ivy's invasive tendencies are typically shortlived, as it often succumbs to native vines (such as Virginia Creeper) when dispersed out of controlled bounds. Many believe Boston Ivy was first introduced to Europeans by John Gould Veitch, who discovered it on Mount Fuji in Japan. Its popularity quickly grew, and today the ivy has been grown everywhere from Fenway Park in Boston to Dallas, Texas. Boston Ivy is unique in how it attaches to structures and surfaces. Unlike true ivies, such as English Ivy that attach with invasive aerial rootlets that can severely weaken brick and wood structures, Boston Ivy attaches to surfaces with tendrils tipped with sticky disks. This means that that the plant effectively glues itself to structures without structurally damaging the surface. The adhesive forces are so strong that researchers with the Plant Biomechanics Group have taken notice. Because of this special quality, Boston Ivy is not only a safe addition to structures and buildings, but a wonderful energy saving plant - effectively shading buildings during the summer and allowing buildings to absorb heat during the winter thanks to its deciduous nature.

According to Michael A. Dirr's Manual of Woody Landscape Plants ... 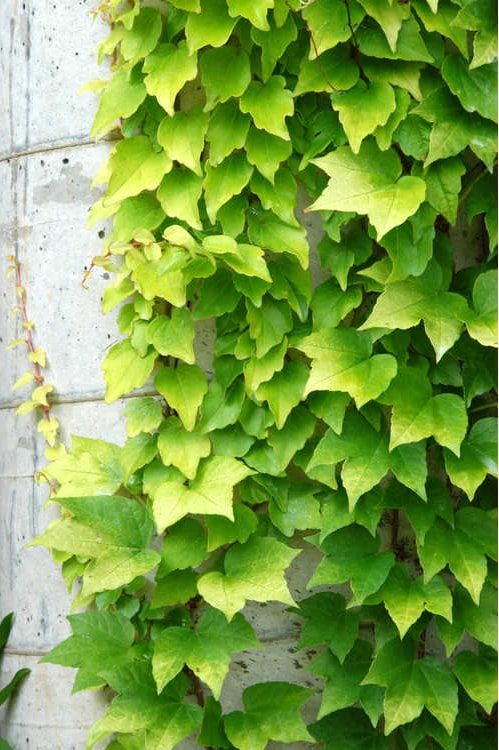 In September of 1988, Arnold Arboretum senior research scientist Peter Del Tredici was walking home from a Boston Red Sox game when he noticed what appeared to be a glowing section of growth on a nearby apartment building (as seen here). The mutant strain of Boston Ivy would soon become known as Fenway Park Boston Ivy. After successfully reproducing the mutation in 1989, Peter Del Tredici would go on to gain permission for Fenway Park name usage from Executive Vice President and Counsel for the Boston Red Sox John F. Donovan in 1991. As one of the most popular cultivars of Boston Ivy in landscape use today, Fenway Park is renowned for its often glowing chartreuse leaves depending on sun exposure. According to the Arnold Arboretum, "When grown in full sun, the color comes close to the Royal Horticultural Society (RHS) yellow-green 151A to C; in shade, it is a uniform lime green (RHS 154C to D)." Fall colors are identical to the species. It is important to note that hotter, full sun environments typical of the Southern United States have caused temporary seasonal defoliation in specimens. 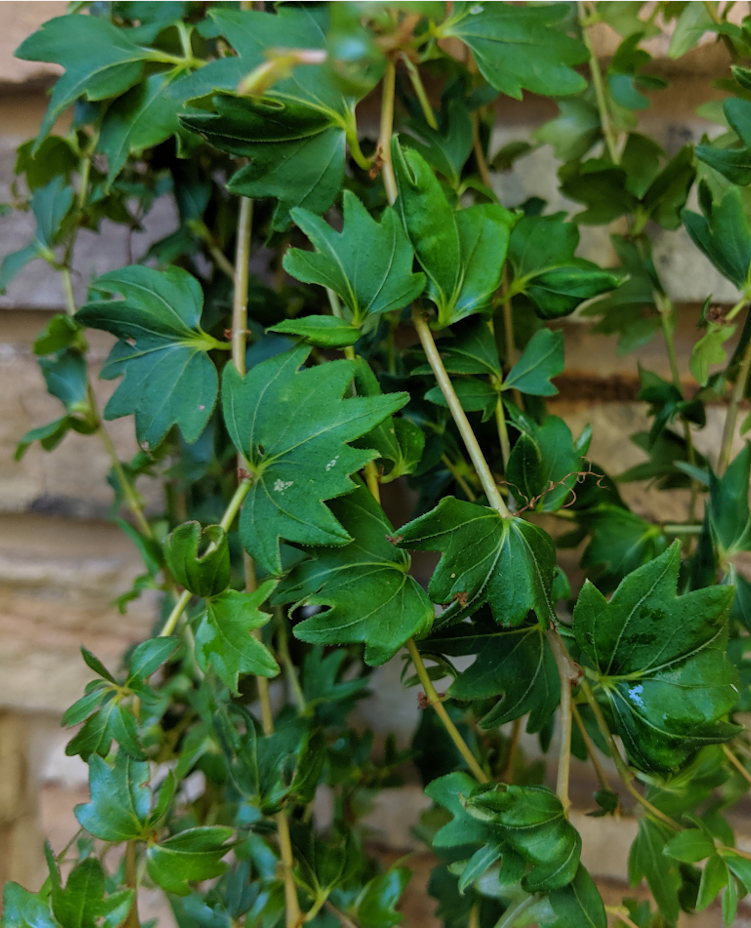 Low's Boston Ivy is an extremely curious cultivar of Parthenocissus tricuspidata. Unlike the straight species, the Low's cultivar is not suited to act as a dense cover for walls and other structures. Instead, this diminutive variety lends itself as a unique accent to structures providing a beautifully delicate texture. With adult leaves approximately an inch across in size, 'Lowii' Boston Ivy turns a rich crimson during the fall. Adult leaves have 3 to 7 deep lobes and often appear to crinkle or curl slightly. The cultivar is more prone to intertwine on itself during growth, giving it further distinct appeal. It provides a wonderful accent piece when grown in hanging baskets or upon trellises. According to the January 1936 edition of the Journal of The American Horticultural Society, the cultivar was said to have been found in a bed of common Boston Ivy by an Englishman named Mr. Low. Mr. Low is presumed to be either Sir Hugh Low or his father, Mr. Hugh Low - both of Clapton Nursery. This places the discovery of Mr. Low's Boston Ivy between the mid and late 1800s. 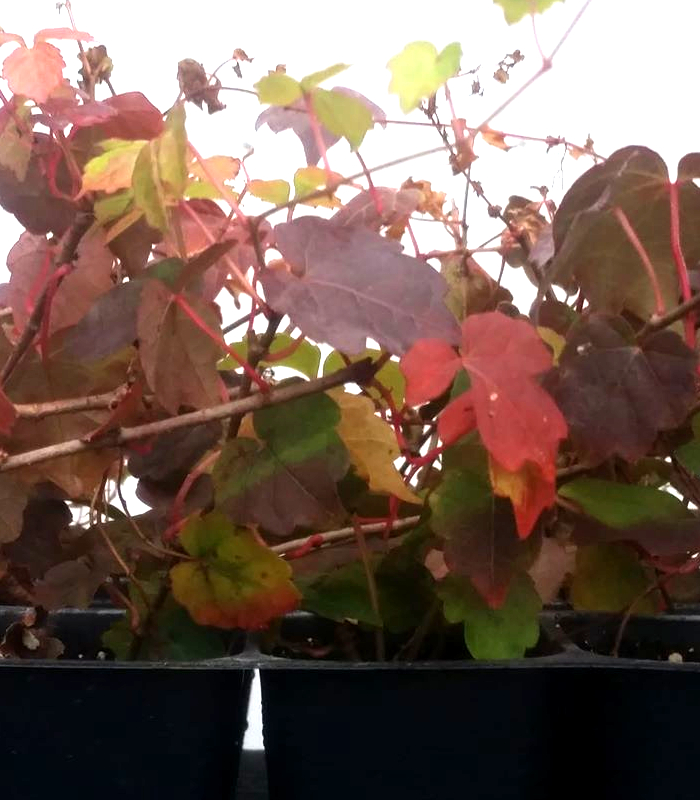 According to the Proceedings of the Nineteenth Annual Convention of the Society of American Florists and Ornamental Horticulturalists held at Milwaukee, Wisconsin in 1903, the Purple-leaf cultivar of Boston Ivy was first introduced by Dreer Nurseries of Philadelphia, Pennsylvania under the botanical synonym Ampelopsis veitchii 'Robusta Purpurea.' With subtle bluish-green foliage and purple-tinged young growth, the cultivar's true appeal comes during early fall. While common Boston Ivy foliage is turning wonderful shades of red, Purpurea Boston Ivy foliage takes on an intense purple to maroon hue. Coloration is remarkably consistent. Extensive catalog and academic research of this cultivar has led Boyd Nursery Company to conclude that the commonly listed Boston Ivy cultivars, Robusta and Atropurpurea, are likely mistaken specimens or descriptive reports of the Purpurea cultivar. 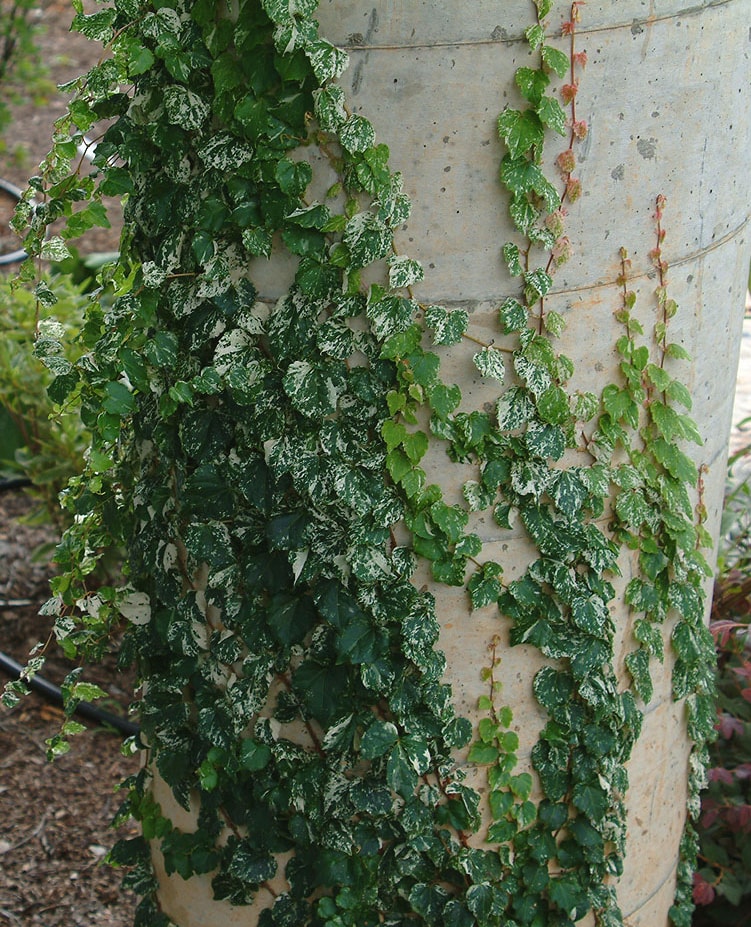 Ginza Light(s) Boston Ivy is one of the most beautiful cultivars of Parthenocissus tricuspidata currently grown in the United States. Named for the Ginza community within Tokyo, Japan, this cultivated variety stands apart from the species thanks in part to its white variagted foliage. Adding a splash of color that most resembles a light dusting of snow or powdered sugar on its young foliage, the plant retains the resilient nature of its species. Mature foliage depending on the environmental conditions may display the dark green foliage typical of the species. First introduced by Hines Nursery (now Hines Growers) in California and Oregon in their 1999 catalog, this cultivar has now become quite rare. Boyd Nursery Company currently provides limited quantities each season under the name Powdered Sugar ™ Boston Ivy.

As hinted above, Boston Ivy has the capability of doing more than just beautifying structures. Because of its minimally invasive approach to climbing, Boston Ivy can also offer significant energy savings on the heating and cooling of buildings on which it grows. According to research partially funded by the Spanish Government, there are two primary methods of vegetation integration into a building - green roofs and green façades. Of these two methods, "greening the walls of a building has potentially more effect on the building environment than greening roofs, as the surface area of the walls of buildings is always greater than the area of the roof." While such integration often has slightly higher initial investment and maintenance costs, the sunscreening effect provided by a green façade has been shown to offer reductions of up to 55.4°F (13°C) at 15 hours in the external surface temperatures, and interior surface temperatures reductions up to 51.8°F (11°C) at 18 hours. This potential for temperature reduction during the hottest months equates to significant energy savings, and can offer a unique asthetic opportunity not limited to physical walls - as seen with this living sunscreen. Furthermore, because Boston Ivy is deciduous in nature, summer energy gains are not lost during the winter months as with its other evergreen creeper counterparts. East and West orientations have been shown to have the greatest importance in energy reductions during summer.

Boston Ivy energy efficiency works through four main effects - the Shade effect, the Cooling effect, the Insulation effect, and the Wind barrier effect. The Shade effect consists basically on the solar radiation interception provided by the Boston Ivy. The Cooling effect takes place due to the evapotranspiration from the Boston Ivy leaves and stems. The Insulation effect is related to the insulation capacity of the different layers, such as the air in the ivy layer, possible intermediate air layers, the substrate layers, etc. Finally, the Wind barrier effect refers basically to the capacity of the vertical green system, plants and support structure, to modify the direct wind effect over the building facade.

Because of its varied appearance, Boston Ivy is commonly misidentified as other plants. Most commonly mistaken as Virginia Creeper (Parthenocissus quinquefolia) or Eastern Poison Ivy (Toxicodendron radicans), Boston Ivy can be correctly identified by examining certain apparent traits. The most obvious of these traits have been expounded below. 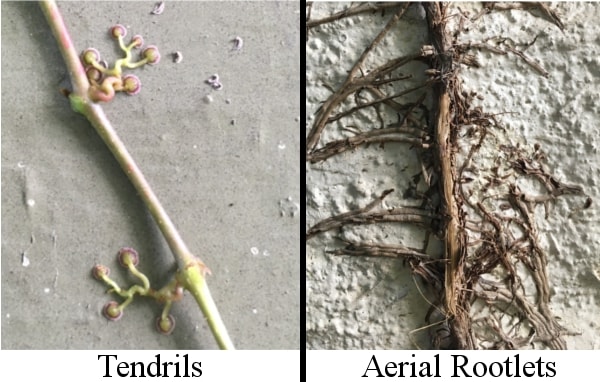 As mentioned at length above, Boston Ivy adheres itself to surfaces using sticky disks called tendrils. These clinging feet appear at intervals along the stem and have a strong resemblance to frog toes. While Virginia Creeper (Parthenocissus quinquefolia) also uses this method of climbing, it is important to note that Eastern Poison Ivy (Toxicodendron radicans) does not. Eastern Poison Ivy climbs surfaces with the aid of aerial rootlets, similar to those of English Ivy (Helix hedera). 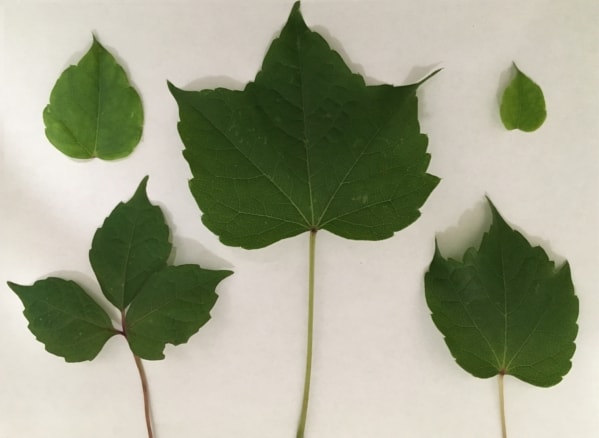 One of the main causes of Boston Ivy misidentification rests in the fact that the plant can take on multiple leaf forms. As its botanical name suggests Parthenoicissus TRI-cuspidata leaves are often centric around the number 3. Adult leaves have 3 lobes. Similarly, young stems produce 3-leaflet compound leaves. Only the youngest shoots produce heart-shaped leaves. 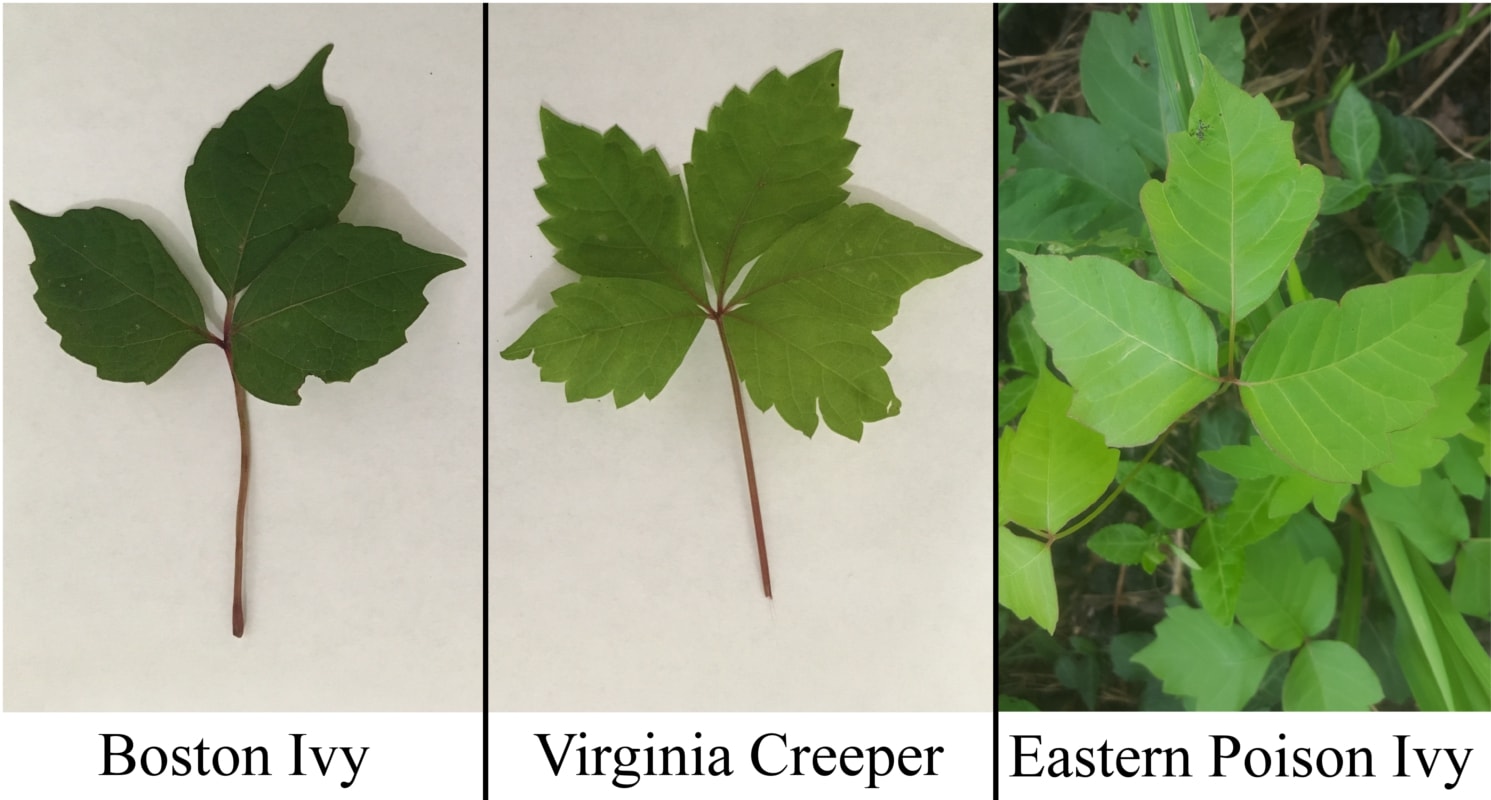 Where can Boston Ivy be purchased?

We offer Boston Ivy in several rooted cutting packages, including our NEW CULTIVARS Low's, Purple-leaf, Powdered Sugar ™, and Fenway Park. All cultivars that we sell are asexually propagated. We also provide 5 plant packages of Virginia Creeper, the American cousin of Boston Ivy. When your order is received, plants are collected as soon as the weather permits. This time-frame is normally within one week. We monitor national weather conditions and temperatures for shipments. If at any time your order must be delayed for weather concerns, we will advise you by phone. For a quote on larger quantities, please call or email us. We ship via Priority Mail from zip-code 37378 and DO NOT ship plants west of the Rocky Mountains.

This product may be shipped year round!